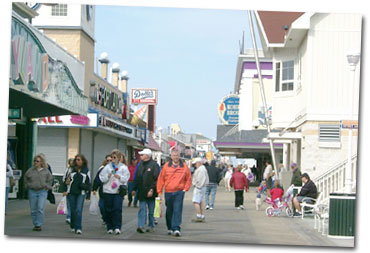 In 1869, all that was to be found along this now famous beach was a one-story inn, owned and operated by Isaac Coffin, who had the first cottage on the beach with paying customers. As interest in the town grew, a 400-room hotel known as The Atlantic Hotel was built in 1875. Besides the beach and oceanfront locale, it offered dancing and billiard rooms to its visitors as well.

In the early 1900s, the Trimper family of Baltimore opened an amusement park called Trimper's Amusement Park, a family business that is still going strong to this day. Business was later boosted by the arrival of the railroad and a bridge across the Sinepuxtent Bay, providing visitors a direct route into Ocean City. However, not all changes to the town were manmade. When the hurricane of '33 created a natural harbor, the resort town grew into a commercial fishing center, furthering its value to those seeking the laid back lifestyle at the beach.

In 1902, several oceanfront hotel owners got together and constructed a wooden walkway for the convenience of their guests, the beginnings of the town's well-known boardwalk. At high tide, it was rolled up and stored on hotel porches until around 1910 when a permanent promenade was built. The first permanent boardwalk ran approximately five blocks and was expanded to 15th Street in the 1920s. After being leveled by a storm in March of 1962, it was rebuilt to its present 2.5-mile length, ending at 27th Street.

Today, Ocean City has become a year-round destination. Due to a moderate climate, millions of visitors arrive from late spring through the late fall. Situated on a ten-mile long barrier reef, the resort is filled with cottages, condominiums, hotels, restaurants, amusements, and plenty of shopping opportunities, providing enough fun and excitement for all ages.

Just across the Assawoman and Sinepuxent Bays sits West Ocean City. It has rapidly grown in previous years into a commercially active center serving the resort citizens and visitors with an outlet mall, many service businesses and the Ocean City Airport. A few miles south of the airport, toward Assateague Island, lies South Point, an area of majestic bayfront homes and estates.