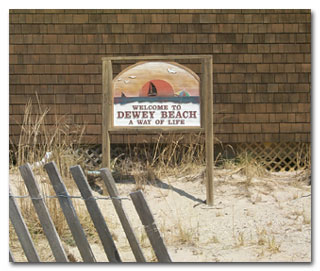 Dewey Beach lies on a small strip of land between the Atlantic Ocean and Rehoboth Bay that is approximately one mile long and two blocks wide. Despite its small size and low year-round population of approximately 300, it's not uncommon for thousands to descend upon the town during the summer weekends. However, as is the case with most beach areas, Dewey Beach quiets down in the fall and winter.

Dewey's history began after the Dutch founded Lewes in 1631. From 1670 to 1730, farmers plowed the land south of Lewes that we know today as Rehoboth and Dewey Beach. However, the blueprint that would create the Dewey didn't come to be until about 1885 when Clementine and Robert West bought 135 acres of land from a gentleman by the name of John Roades. That strip of land, which we now know as Dewey Beach, extends at its north end from Lake Comegys and Silver Lake, all the way south to the bay. Its southern border was where Dagsworthy Street is today.

While a traditional grid form plan for the town was prepared, only a modest number of lots were developed. Subsequent developers who formed the Rehoboth By The Sea Realty Company in Georgetown, Del., in 1925 were apparently responsible for developing what is now the north part of Dewey Beach, though at the time known as Rehoboth By The Sea.

In 1915 a land surveyor, Morgan T. Gum, was commissioned by the state to prepare a subdivision plan for what is now the southern part of Dewey Beach, from Dagsworthy Street to Collins Street. Gum also prepared his plan on a basic grid system as a continuation of the northern part planned in 1855. The continuity of the physical pattern of development generated the original plan of Dewey Beach, though in 1885, the name Dewey Beach was probably not in use. 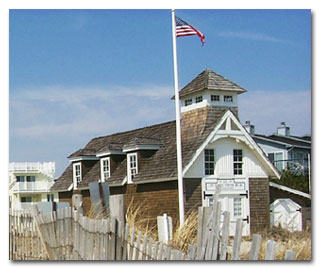 Roughly from then until the end of World War II, Dewey remained a quiet town with farms to its northwest and empty marshes and beaches to the south. The first documented reference to the name Dewey Beach seems to have occurred in a book written by Robert Robinson in 1879. Robinson asserted the town had been named after Admiral George Dewey, hero of Manila Bay in the Spanish-American War. Other stories about the origin of the name persist to this day.

Circa 1944, Route 1 was built, thus providing greater accessibility to the beach town. While the new road brought new construction in the following years, the Great Atlantic Storm of 1962 destroyed or damaged many buildings in Dewey Beach. This so-called "Storm of the Century" had come without warning and as it passed through it combined with a nor'easter to generate the two-day storm that is estimated to have done millions of dollars worth of damage to Delaware coastal communities.

Following the storm, water and sanitary sewer systems were introduced to the town, a critical change that attracted a greater number of people. The town experienced a period of modest development from 1950 to 1960 when these utilities were extended to include Dewey. By the mid-1970s developers became very interested and in 1981 Dewey became incorporated.

Today, Dewey Beach boasts a summer population that normally exceeds 35,000 people and provides attractive adult and family entertainment via a spectrum of coastal resort activities including closely monitored bars. Notwithstanding its reputation as a hotspot for the college crowd, Dewey Beach is also a popular family resort, particularly because of its wide, sandy beaches, and many hotels, cottages, and condominiums found in the area.