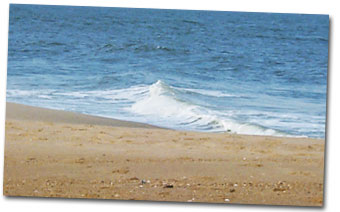 The beginnings of modern Fenwick Island may be traced as far back as to March 23, 1680, the day Lord Baltimore granted a tract of land called "Fishing Harbor" to Colonel Williams Stevens. Years later, in 1692, Fishing Harbor was then conveyed to Thomas Fenwick, a wealthy York planter who originally settled in Maryland, but never lived at the island named for him. Fenwick's rights to the land at Fenwick Island came through a grant from Lord Baltimore in 1682. Fenwick lived in Sussex County for many years and served as a Justice of the Peace, Sheriff, and Register of Wills before he died in Lewes in May 1708.

The Trans-Peninsular Line, surveyed in 1750-1751 to establish Delaware's southern border, begins in Fenwick. A line marker at the lighthouse displays the coat of arms of Lord Baltimore and the Calvert family of Maryland on the south side, and on the north side it shows the coat of arms of the Penn family and is the oldest standing man-made object on the coast between Indian River and Ocean City. Like the lighthouse, the stone marker has been well preserved on its elevated site.

Residents built the first bridge to the mainland in 1880, however it did not survive long amongst the strong currents. A new wooden pile drawbridge was built in 1892, a third in 1934, and the current bridge in 1958. By the 1930s, the early cottages that dotted the landscape were very simple with no heating or plumbing, and no electricity. Water came from the ground, ice for the icebox came from the mainland, and kerosene lights glowed at night. The inconvenience of primitive living was more than compensated for by the spacious beaches, leisurely pace and excellent fishing.

It wasn't long until the state of Delaware noticed the significant amount homes on state land. In September of 1941, after months of meetings, the state notified the homeowners that it would sell them lots at a rate of $200 for beachfront and $100 for street lots. All homeowners were told they had to be on purchased property prior to January of 1942 or remove their house.

Fenwick continued to attract more and more people and by the early 1950s, concerns began to mount over the increasing development and creeping commercialism. Residents feared the town would become like Ocean City, something they did not find attractive, and sought protection through incorporation. The act to incorporate the town passed in July of 1953.

The residential area of the town doubled when Fenwick annexed the land on the west side of Coastal Highway. Modern upgrades such as a sewer system and city water have helped make Fenwick Island a year-round town. Today, the year-round population easily exceeds 300 residents, a number that continues to grow as the demand for homes along Delaware's southern coast continually rises.